As a culture, we have always been obsessed with size. The bust-to-waist ratio expectations and ideals have constantly been fluctuating. Ever since I can remember, my siblings and me have often asked each other “do you think I’m thin?” and I never paid the question any serious thought really until now. In order to fully understand the roots behind this psychology, I decided to roll up my sleeves and dig a bit into our history since 1940…

From what point did the mental awareness of our bodies become so warped?

UK advertising, an industry that goes back 300 years with one of the biggest ad budgets in the world bar three countries according to Statista.

Given that advertising has such a strong hold over dictating or promoting beauty ideals, it would be interesting to look into how much responsibility advertising has for influencing the inadequacies many feel regarding their weight.

It is interesting to note before skipping on that society has a unique mutually causal relationship with advertising; essentially, we both affect and are affected by ads and media. In this way, it is one of the best mediums to show the changes in the minds and attitudes in society!

While in the ’40s long legs were still seen as a point of beauty, towards the ’50s a females bust size came to be a more dominant feature. Over these 20 years, the generally favoured voluptuous figure of the 1800s came back and Marylin Monroe’s “hourglass” became number one for women of the period. Indeed, the famous actress Marylin Monroe is forever crowned as a sex symbol of that era.

This tendency towards feminity arose was in all likelihood due in part to women wearing men’s clothing and plainer fashion during the war. Women would never go out without make up, and even cigarettes where sometimes promoted as a good dieting method. 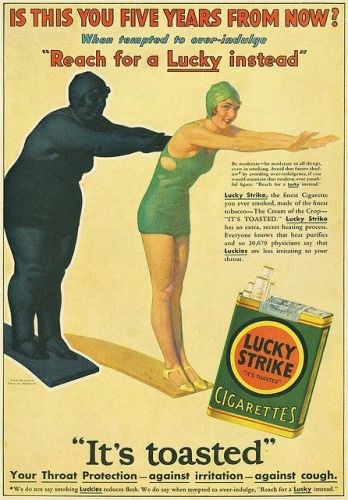 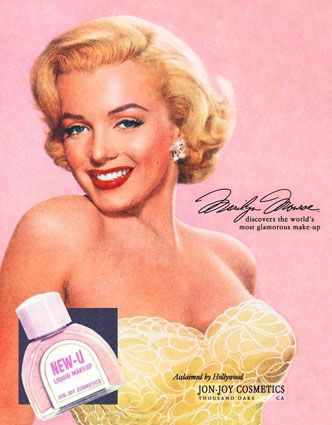 The graph above shows the general body weight trends in the average women (blue) and the average model (pink) with the BMI as the measurement system.

The red cross marks what the NHS considers to be obese or underweight, the green circle is what they deem as a healthy weight, and the yellow triangle is what can be counted as overweight.

Socially and politically, young people in Britain of the 60s and 70s rebelled against the traditional feminine image and racial discrimination. From the 60s there was more and more preoccupation with losing weight – having smaller buttocks – and fostering a more androgynous look. It was only towards the end of the 1970s that a more athletic look, gyms, and workouts came into the picture.

It is a little ironic that although there was a wave of women’s rights movement to “free” the female body from the corset (or rather, tight-lacing which was more rare), these corsets were simply replaced to a greater degree by dieting and, later, exercise. 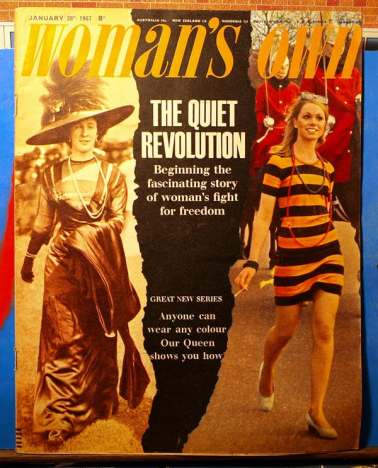 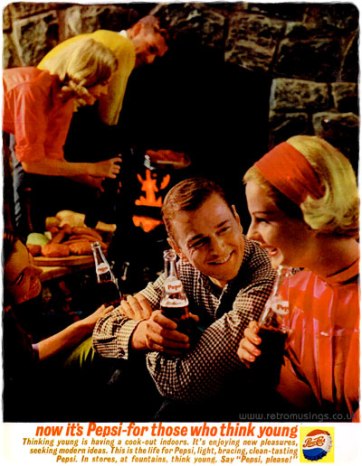 The crash diet which allowed women to lose weight within a short period became popular, and since the number of women going to college increased from the ’60s, TV dinners and ready-made dishes were advertised.

Many young people headed movements against consumerism and were worried about the advertising industry, so, to keep up with the times, companies like Pepsi attempted to appeal to the younger generation. 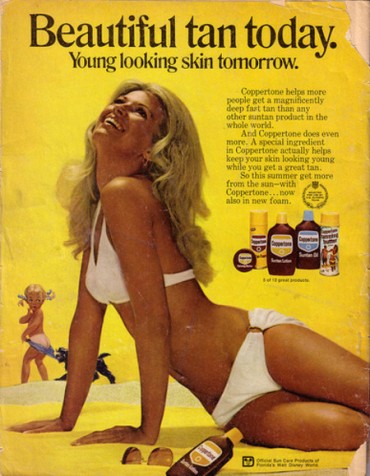 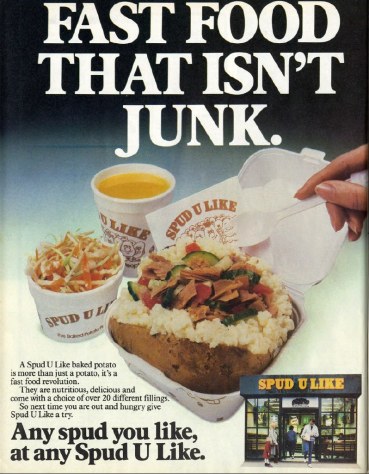 Boom of the “supermodel” & sharp increase in obesity

From the 1980s to the 2000s, the world broke into the digital era, brands and supermodels increased in influence, and obesity levels skyrocketed dramatically. 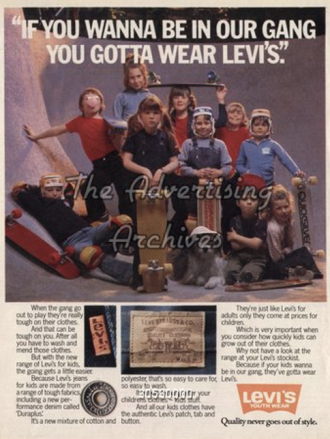 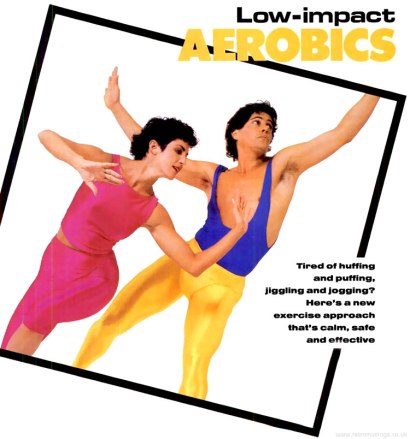 Over these decades, as you can see from the Levi’s jeans ad, the trend towards breaking the gender barrier persisted.

However, towards the 80s a more muscular toned image of female beauty emerged. This body type was not like a true athlete body shape though. The reason for advertising sports and exercise so widely was probably in order to promote the prevention of obesity. Tanning and fitness videos from this period were fire, and shoulder pads to broaden the shoulders like ABBA did were used. 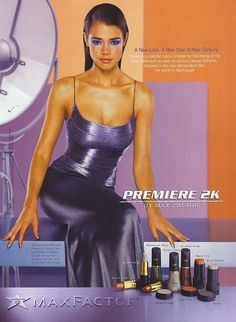 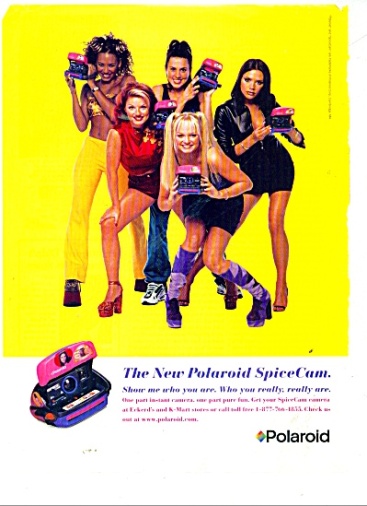 While, the World Health Organisation was alarmed at the growing obesity epidemic, heading into the ’90s, the ideal body weight was actually a below average weight. At this time, anorexia came to be associated with the highest rate of mortality among mental disorders in the ’90s. The stark divide between bodies presented across the media and those seen walking in the streets became more and more evident.

In fact, with the advent of the Internet from the 1990s in particular, futuristic trends made an appearance, and the ideal body type became skinny to the point of being almost alien-like. Higher and higher heels were worn to highlight the length of legs and the height of the wearer.

The generation who lost self-confidence

From the 21st century, a new world graced humanity. Advertisements appeared on the Internet next to search results and later on social media.

With this pressure to be thin and have a thigh gap, the generation in the 2000s experienced a loss in self-confidence and younger children felt pushed towards dieting. In 2016, PACEY, or the Professional Association for Childcare and Early Years reported that nearly a quarter of childcare professionals in the UK noted seeing signs of body confidence issues in children aged 3-5. It was also found that overweight people have a tendency to underestimate their body size and underweight people to overestimate it. 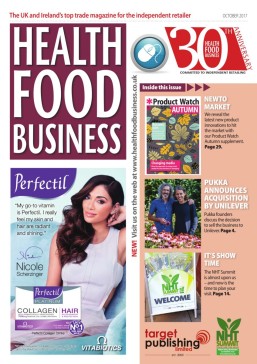 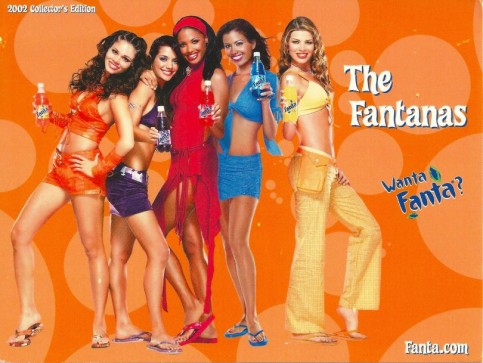 Towards the 2010s, sports and a more lean body shape made a comeback with more and more marketing towards women than before. TV dinners were now considered unhealthy and became less popular. Instead, Superfoods like Kale replaced these foods.

In the early 2000s before 2010, there was more of an obsession being youthful and age care. This can be noted from the “wellwoman” Perfectil ad (on the front page of the Health Food Business magazine) promoting luscious hair and clear skin, which were often pasted all over the London Underground. 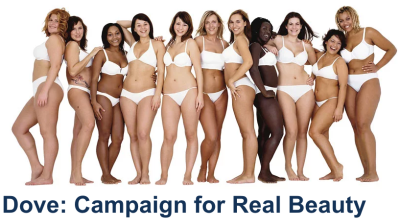 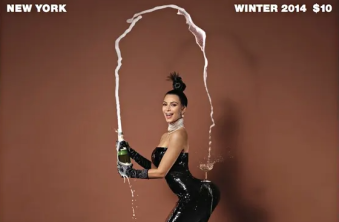 It was only really towards the end of the 2010s that more diversity was embraced, like in the 2007 Dove ad. This tended to extend not only towards race and ethnicity, but also age and body weight/shape. Even the Mayor of London, Sadiq Khan, recently moved to ban advertising deemed as bodyshaming.

Together with more use of social media, a curvier body shape with bigger bust and buttocks was seen as being the body shape for women to aspire to. In 2014, on the cover of Paper magazine, Kim Kardashian’s butt was described as having “broke the Internet”.

When looking back to this curvy body image, however, it can be seen as a double-edged sword as for many this is a hard body shape to achieve. In order to do so, many resort to plastic surgery which is now being seen in a more and more acceptable light. Granted, many are still hanging onto their youth through use of botox and fillers.

At the end of the day, me and my sibling’s weight worries come down to being the result of the extreme variations in expectations towards women’s body weight/shape over the past few decades (or even centuries). There is simply no constant beauty ideal available.

What has advertising got to do with all of this?

Advertising’s use in the consumerist society is to present ‘the good life’ and the tools to achieve it – it propels consumers to dream. As such, it is a catalyst to highlight the “ideal,” à la mode body size and shape. It therefore bears at least some responsibility in the unease women feel about their bodies.

It is worrying how, according to Statista, the budget allocated to marketing in the UK has visibly increased since 2006.

From another side, I must note that this phenomenon of judging people around us by their appearance is by no means new. We have done it for eons. We present ourselves in certain ways in society for a reason. For example, doctors wear a badge or certain clothing for a reason and so do police.

Whether we like it or not, our image matters in society.

However, with the increase of advertising, we are beginning to note the full damage this judgement can have when it is directed towards biological beauty that are elements of ourselves we can’t easily change.

The good thing is that, more recently, we (as a society) have begun to dictate this image of beauty more and more on social media and instagram, showing more bodies of “normal” average women.

I guess what I really want to say to my sibling is:

“you have a normal weight and a normal body, so know that to be the only truth you need to remember.”

For most of us, it is simply important to be aware of how advertising and social media like instagram affect us psychologically so that we don’t project our inadequacies regarding our weight or body image onto other.

Although we might feel that our own bodies are inadequate, there is no need to psychologically damage those around us, especially those younger than us, by telling them they are too thin or too fat if they are not.

So, when my siblings ask me “am I thin?”, I say: “you have a normal weight and a normal body, so know that to be the only truth you need to remember.”

(Unfortunately I was unable to get my hands on any substantial data on weight from before the ’40s.)

Lover of all things to do with: food, culture, travel, sport, daydreaming, fashion, diy, and more food….

Where I'm at in the world